…And so it begins, 14 days, 4 states and 1500 miles of road, from coastal to desert to forest, back to desert, as we travelled through the South West of the United States of America, which I can only describe as one of the most funniest, happiest and exciting trips of my life, blue skies, good tunes and the absolute best company…….but for now, let’s go right back to the start!

After a 9 1/2 hour flight into LAX, from London Heathrow,  a worryingly easy car pick up (Europe you could learn something ) and twenty minute drive to Venice Beach, the blue skies, the palm trees and the wide open, not too full of traffic roads, allowed us the biggest breath out in unison.  City of Stars you warmed the bones of these two very frozen Brits within minutes, in no time we arrived at The coolest, Rose Hotel just off the boardwalk in Venice, we swapped jumpers for t-shirts and jackets for sunglasses, and were deliriously La La in minutes.

We visited Los Angeles about 15 years ago, and although I loved it Wes was not so sure, as we only planned a hot 24 hours in the city, I thought Venice would be my best bet in persuading his opinion. With The Rose Hotel being a stone’s throw from the beach, surf boards and bikes in reach it really didn’t him long to have a new view on this part of L.A.  As we were only staying a night we opted for the smallest Queen room which was more than what we needed, a super comfy bed, minimalist decor, striped fabrics, a vintage clawfoot tub (happy Laura) large artwork that I wanted to bring home and to top it all off  Aesop products in the bathroom (even happier Laura)  The Rose Hotel was designed by Abbot Kinney in 1908, full of character itself along with the people which stroll by, even Jim Morrison took a visit back in the day.  Venice is full of surfers, skaters, hipsters, hippies.  It’s bohemian, lively, arty but simultaneously charming, friendly and ultimately just totally chilled out, and very, very cool; The Rose Hotel works in complete synthesis with its surroundings.  Along with the best coffee and pastries and a communal lobby area where the light just poured in, that and the white picket fence on the decking, we felt pretty much a home. 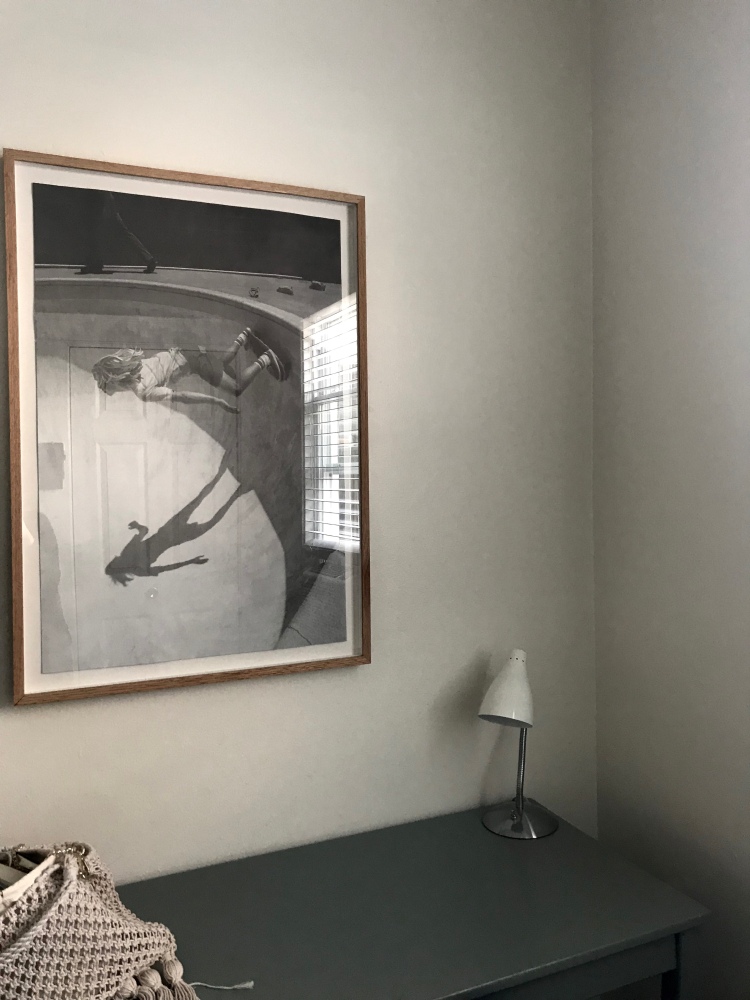 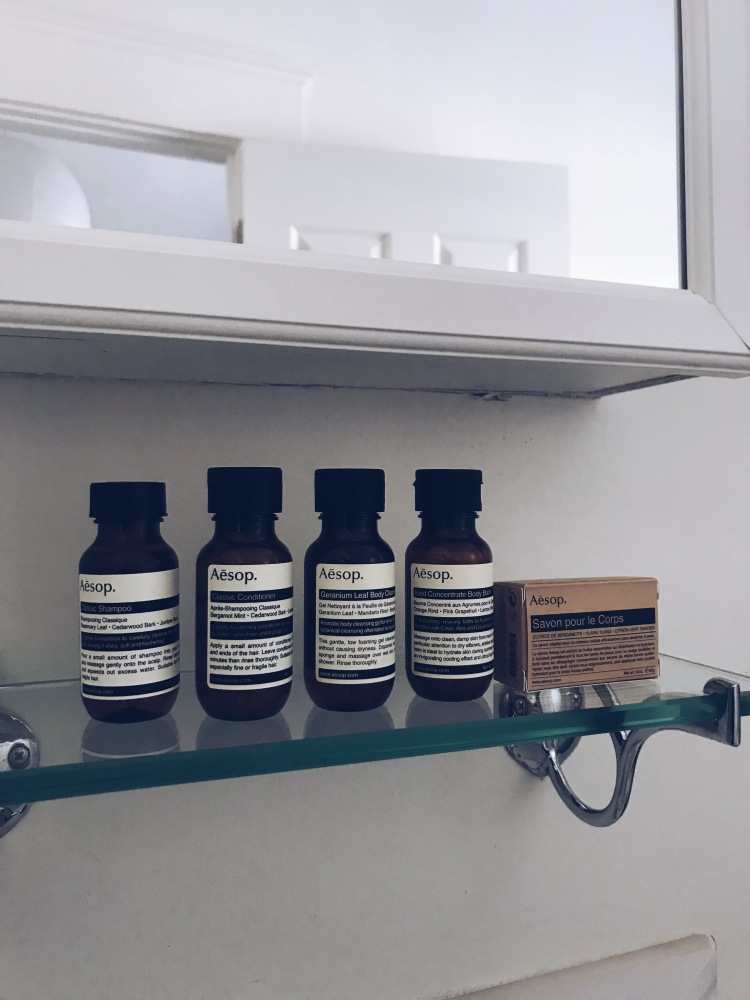 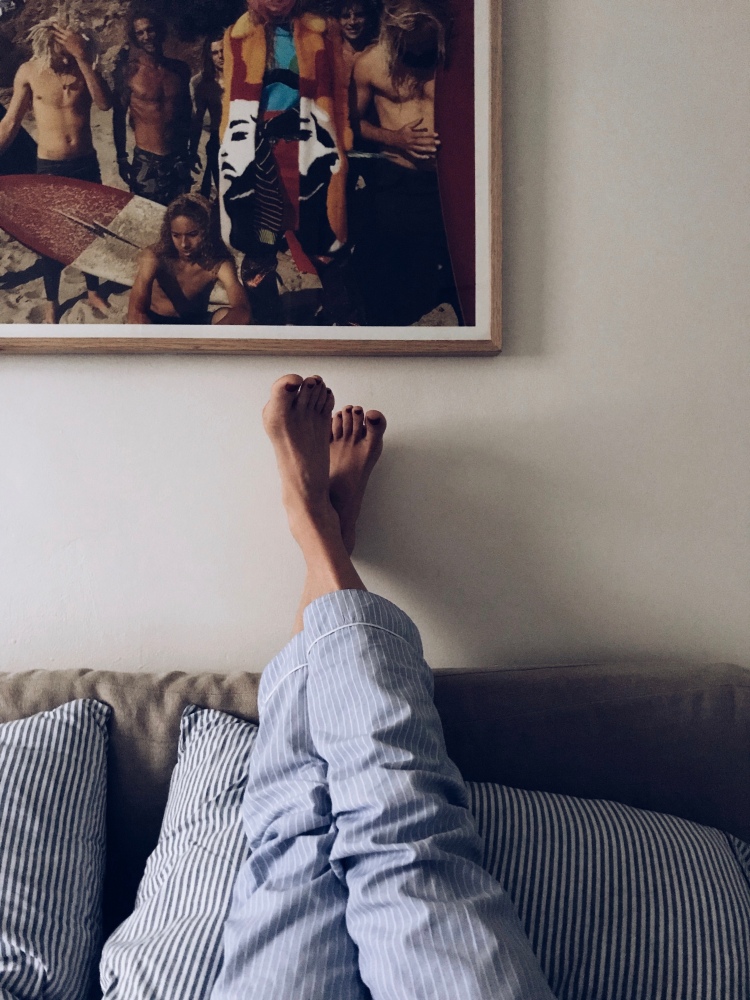 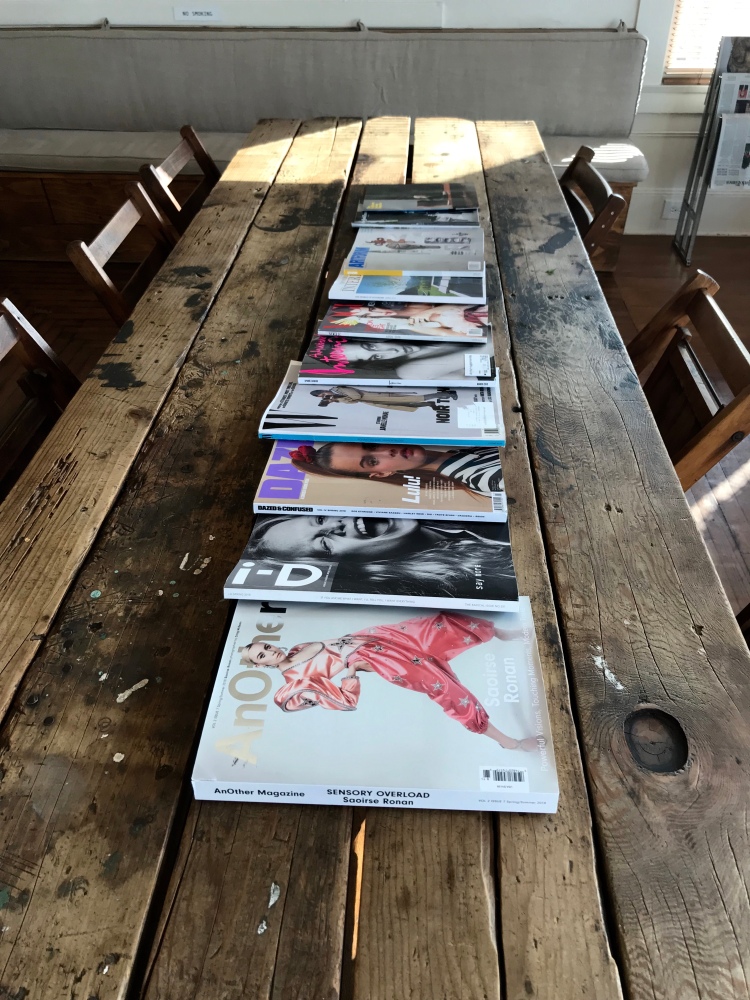 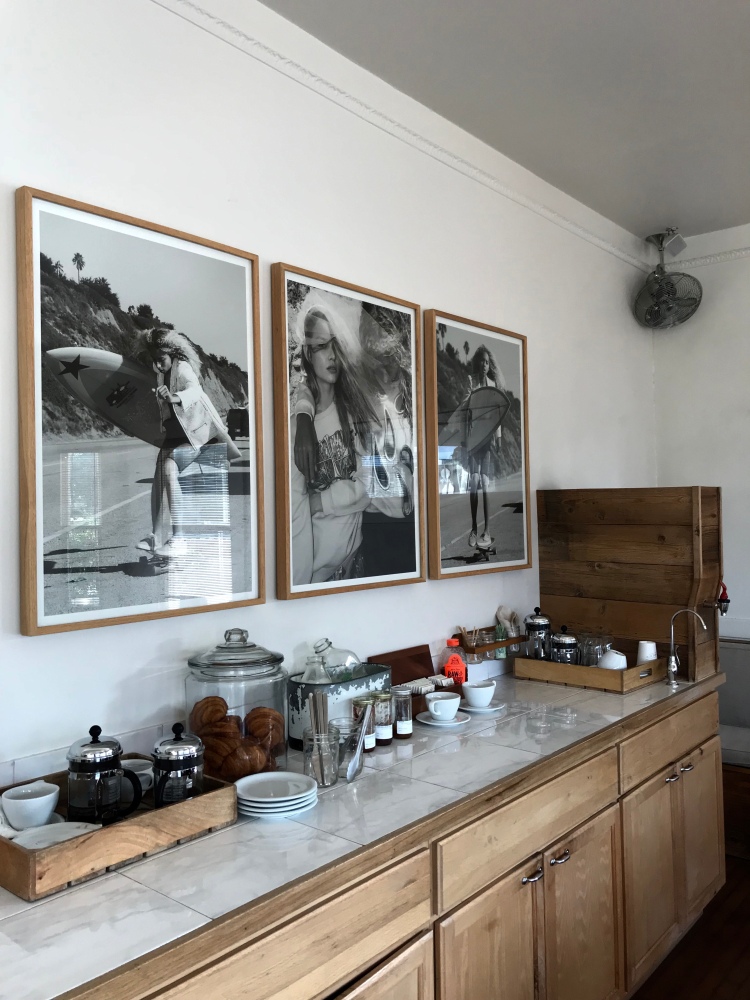 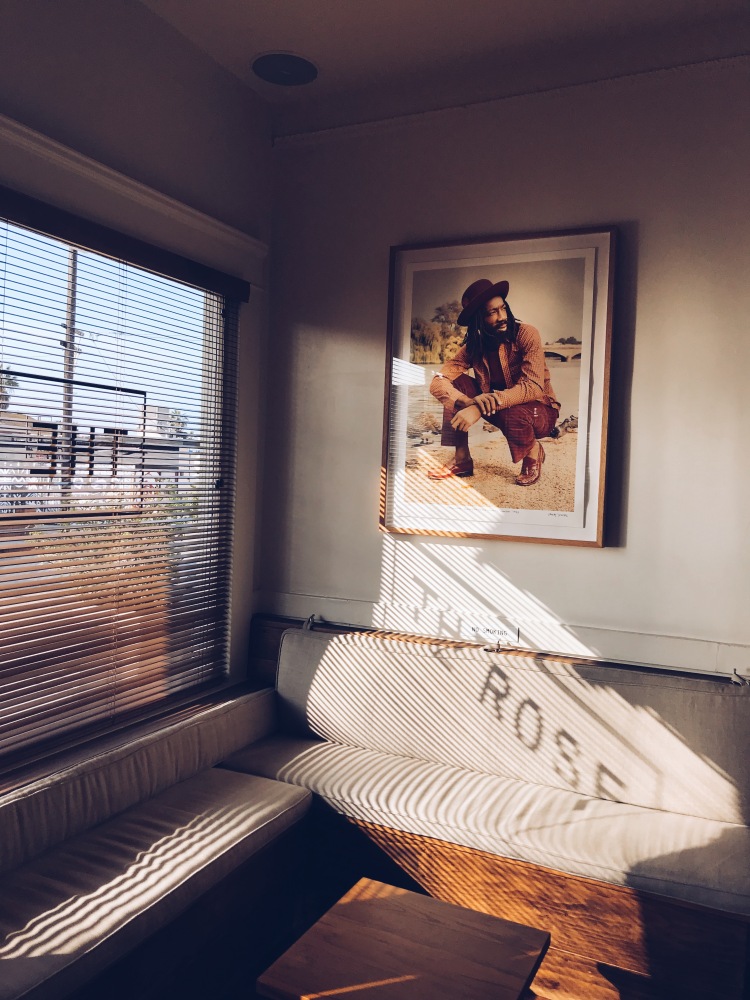 ….and then just like that we were walking along Venice beach.  Surfers, swimmers, bathers and palms.  A long stretch of beach that went on and on, maybe not the bluest of seas but full of character and the softest sand, it must be pretty amazing to have this on your doorstep every day.  We walked up the beach, stopped to watch the skaters do their thing and continued the stroll and coveted the beautiful houses and gardens on and around Abbot Kinney, with some hypothetical house buying before reaching to the top of Abbot Kinney Boulevard, my new favourite street in the world!  Full of fashion, art and food, glorious food, it’s been named as  ‘The Coolest Block in America’. With a re- fuel at Blue Star Donuts, the most delicious lemon and poppy seed donuts that has ever passed my lips and after a few small purchases (I could have spent all day pottering along this mile long hippie haven) we headed around towards the Venice canals.  Man-made canals built by developer Kinney back in 1905 were to try to bring the feel of Venice, Italy to Los Angeles, minus the gondolas. I really did love it around there, so quiet and peaceful, away from the tourists and craze of Venice Beach. Very picturesque, and yet again beautiful homes and gardens and white bridges, an ideal way to start the dream holiday and with that yet again the dream house buying conversations quickly continued. 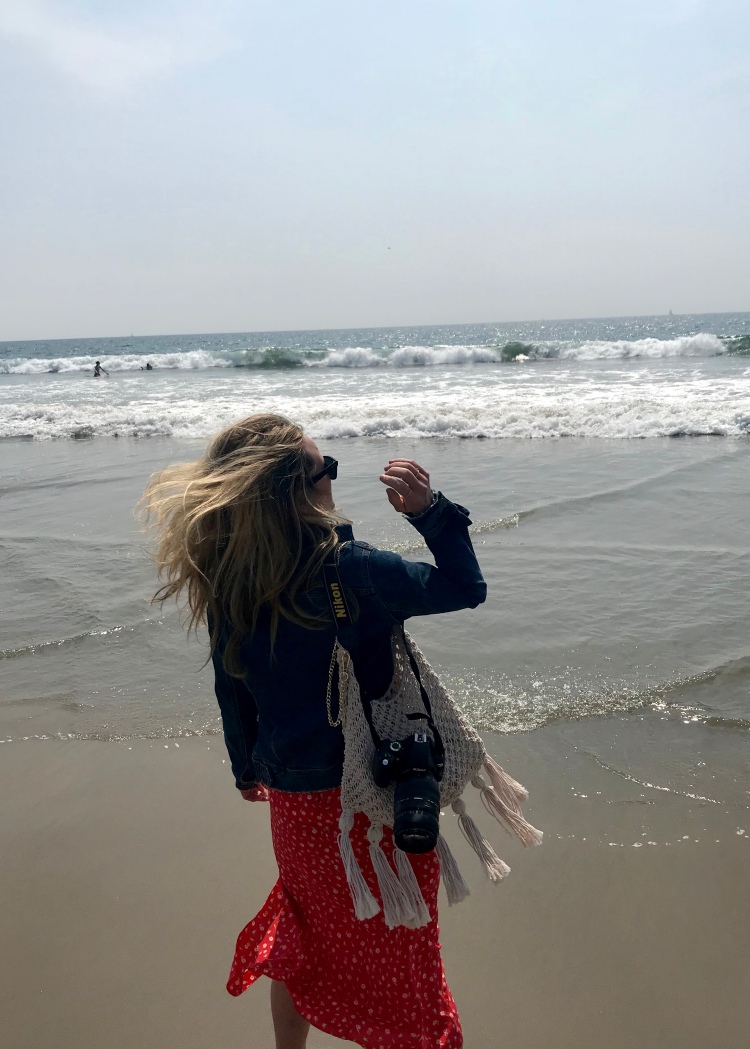 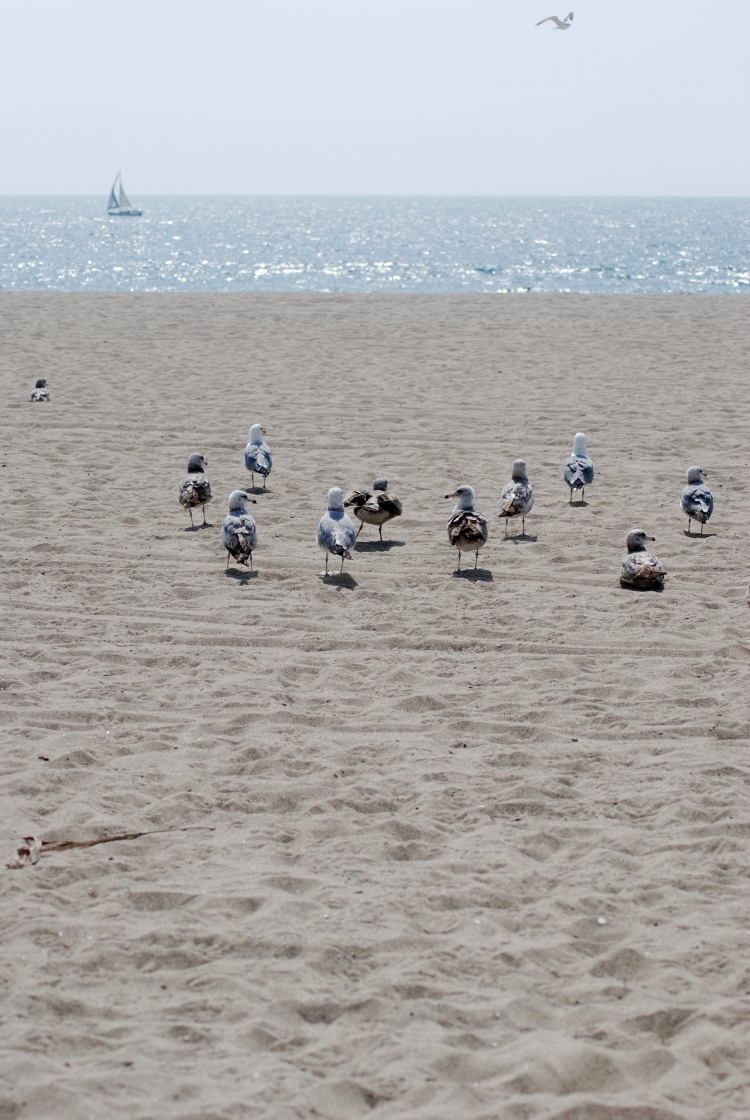 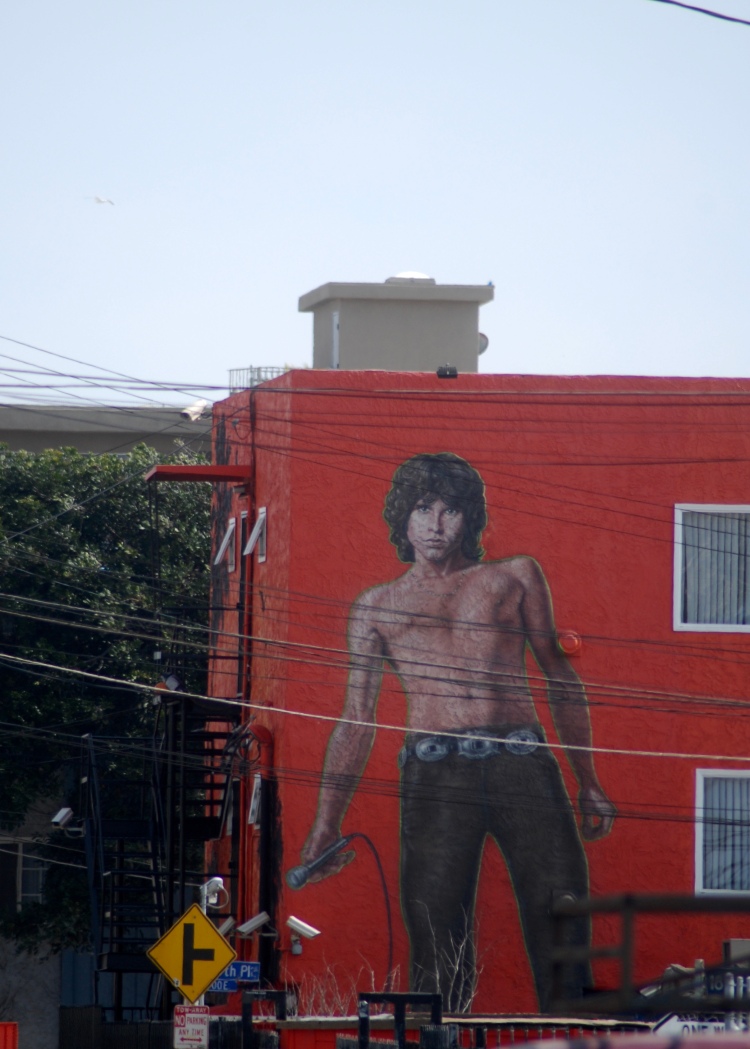 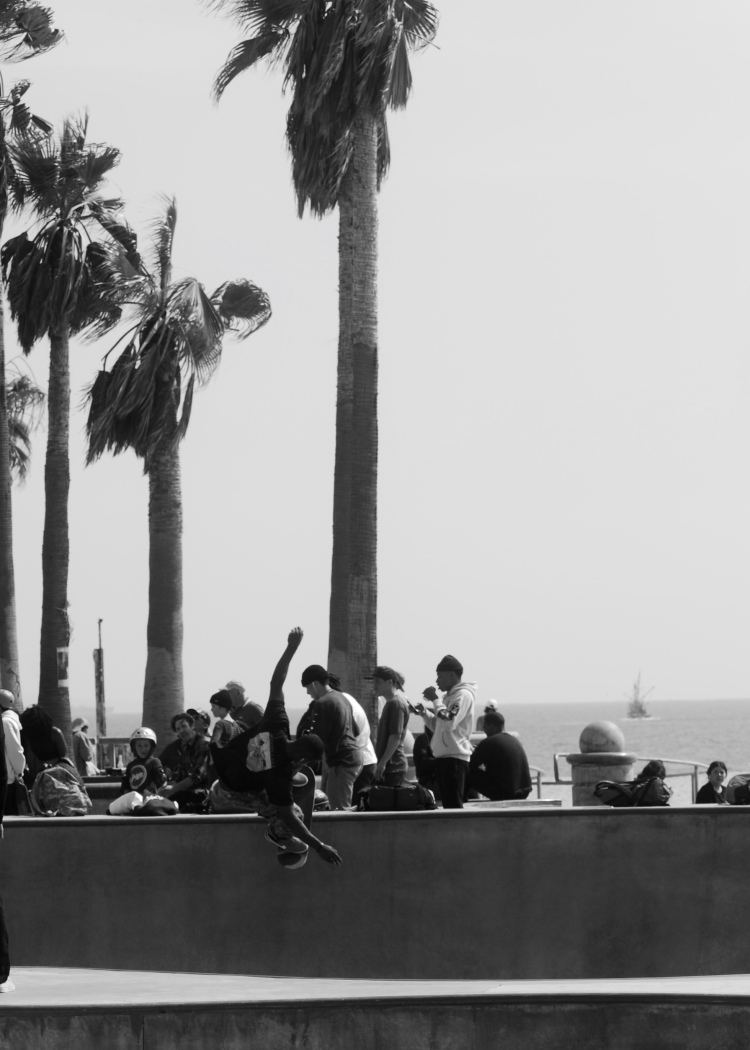 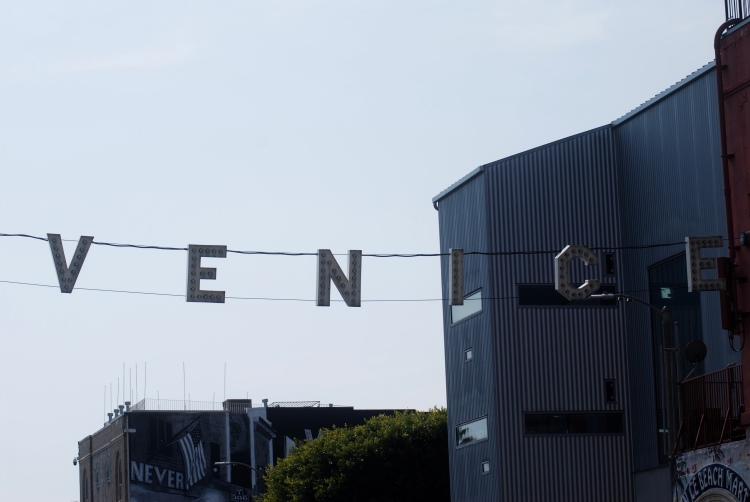 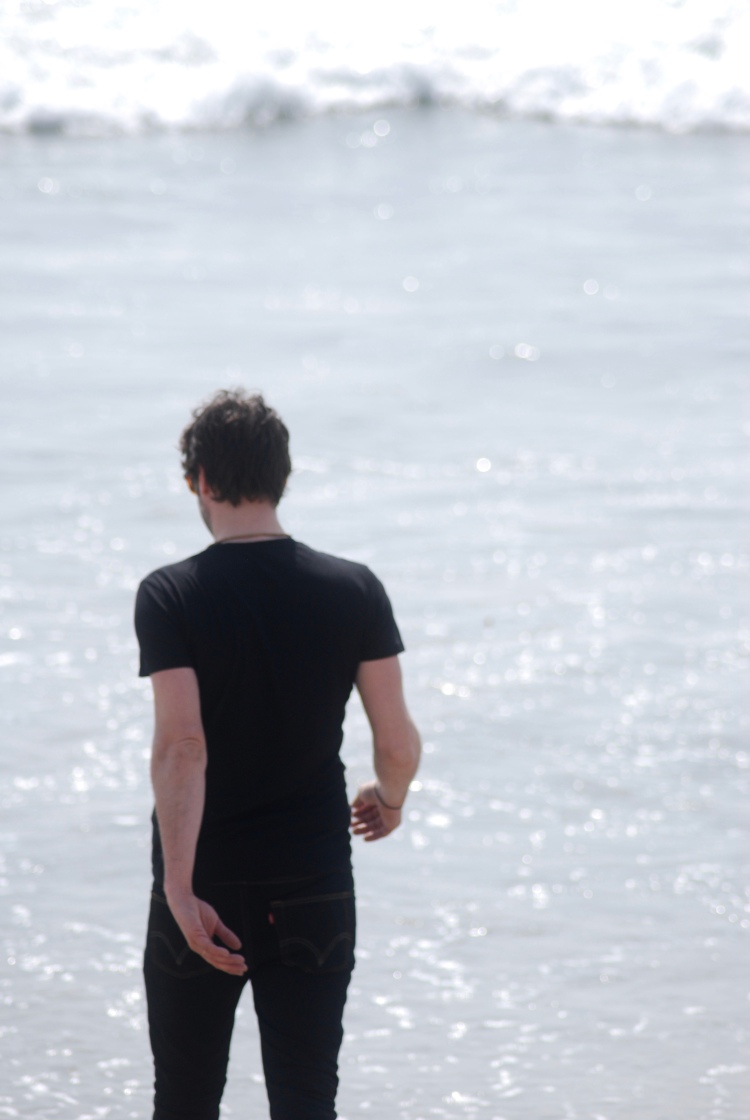 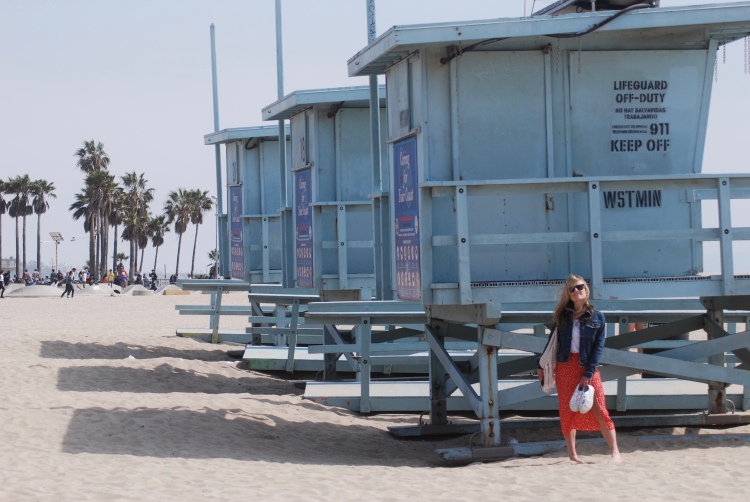 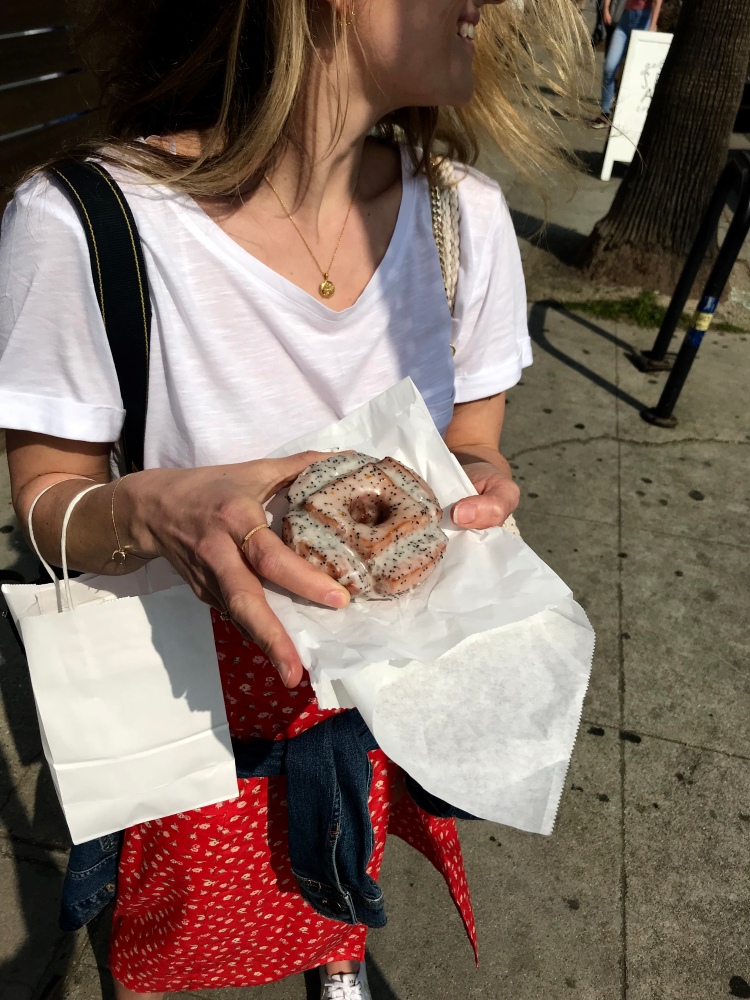 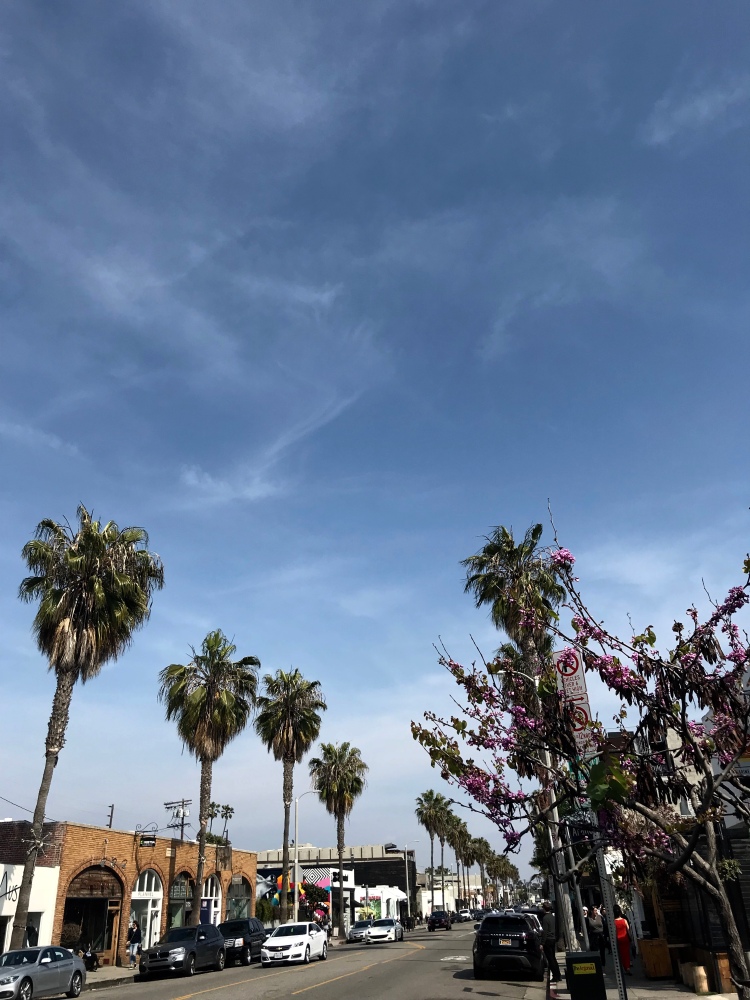 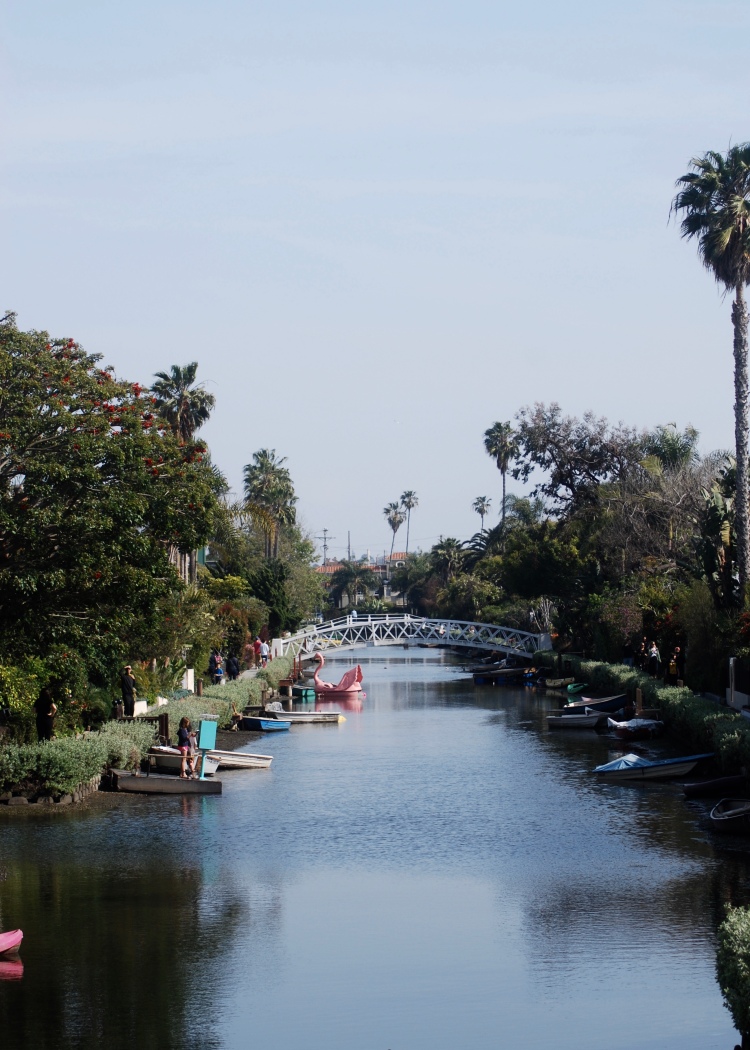 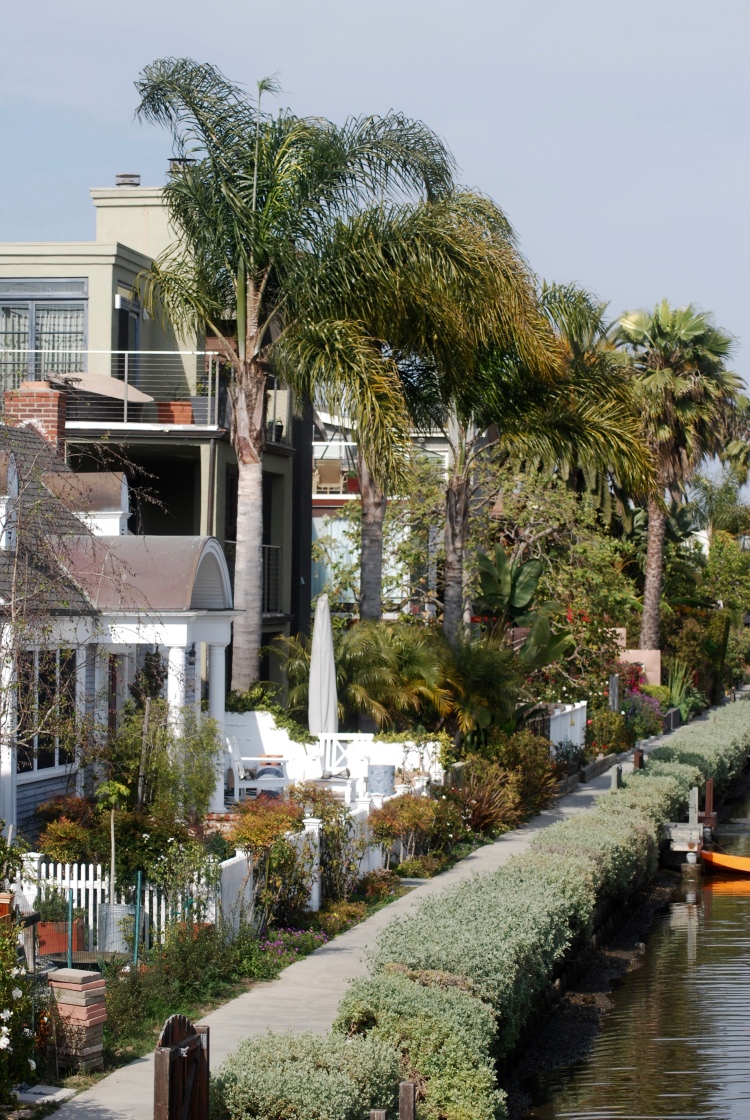 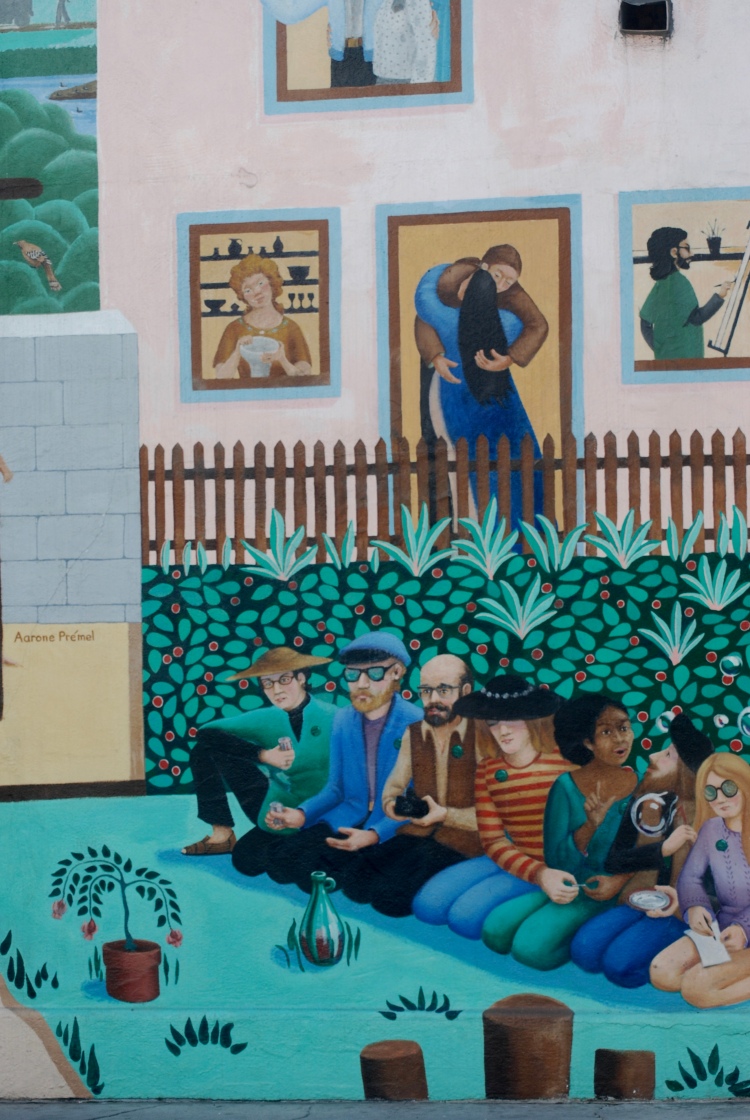 After a quick shower and change we walked from Venice to Santa Monica, a lot of walking  on this jet lagged fuelled day but I think it’s the best way to really get into a city and you get to see so much more, plus it’s much safer for me than on a pair of roller blades.  We were meeting some friends for a drink at Shutters on The Beach, which is known as a bit of a traditional institution in Santa Monica.  A completely different vibe to Venice, very classic and quaint but drinking a margarita over looking the beach on the beautiful white terrace, with the sky turning pink was a very Californian moment and one that I was very happy to be in. 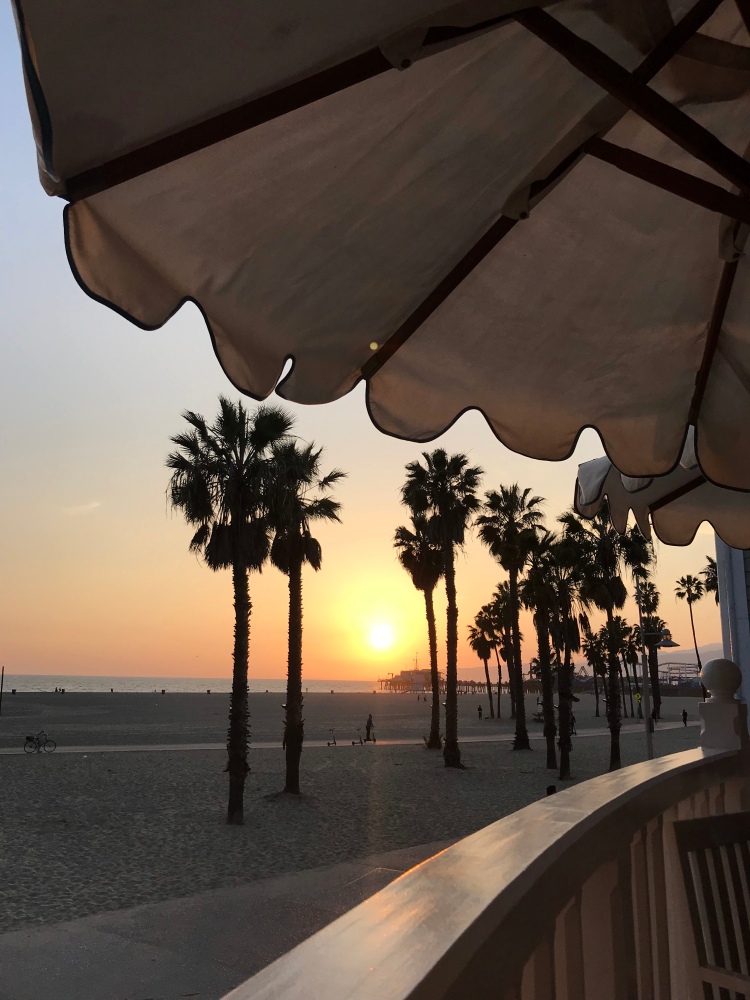 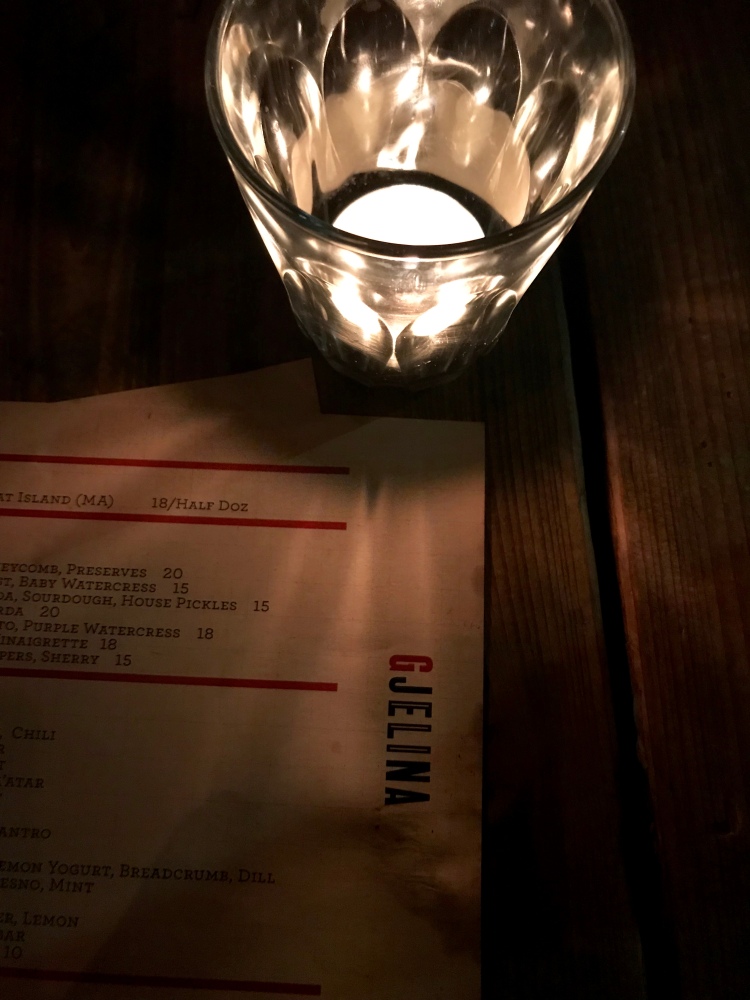 Our friends we met, were in the middle of their four month stint in the US and residing in Venice for a good month, over drinks they mentioned their pull to London but just how much better it was living in Venice, steps from the beach, sunshine, blue sky, pink sky and optimism ….

Dinner was back on Abbot Kinney at GJELINA,  Cali-Italian style food, all fresh , veggie focused and pretty delicious…. and so as I was tucking into smashed pea and mint pesto on toast, wood roasted cauliflower and Pomodoro Crudo pizza,  in my dreamy  Californian holiday state, I thought for a moment that our friends were maybe very, very right…..

We flew with Virgin Atlantic

Picked up a car with National Car Hire

Stayed at The Rose Hotel Venice

Had drinks at Shutters on the Beach

Thank you for reading x